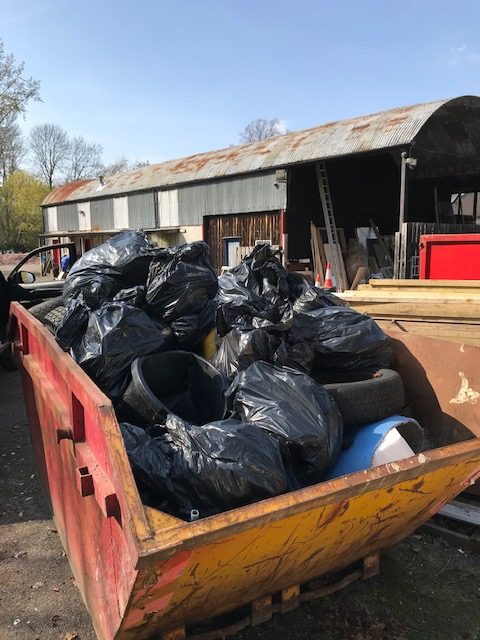 Gamekeepers, families and villagers cleared over 35 bags of discarded rubbish from around Tomatin, Carrbridge and Cawdor village last week, astonished by the scale of rural littering.

The members of Tomatin Moorland Group and Cawdor Estate decided to do a countryside clean-up around their local communities, with some having done a similar thing last year.

However, despite clearing roadside verges and paths just months before, the litter pickers were shocked at how much rubbish had been dumped by the public, yards from available litter bins.

A bike frame, a pair of boots, a television, fly-tipped rubber tyres and a bed were amongst the haul, with dirty nappies and work supplies such as road paint also gathered for disposal.

Lydia Nibbs, Co-Ordinator of the Tomatin Moorland Group, said: “We wanted to do a clear-up because everyone wants to have a nice environment where they live. It is also important for people to respect the countryside. It was a bit of an eye opener, to be honest. Because we did something similar 6 months ago, no one really expected there to be so much stuff.

“In one lay-by, where there was a big black bin for the purpose, we picked up 8 bags of rubbish just thrown around, or beside it.”

Despite greater focus today on the danger of discarding plastics in the environment, the litter pickers were concerned by the number of single-use bottles and abandoned dog poo bags.

An old bed frame had also been broken up and tossed onto a piece of heather moorland, where red-listed wading birds were gathering for the breeding season.

“Access laws are fine but not everyone respects them in the same way,” said one of the gamekeepers who took part in the effort. “These are environments and habitats where there is nesting wildlife.

“It is not uncommon for gamekeepers in this area to be clearing stuff from the countryside that could endanger wildlife. Part of it is education and getting people to take more care.”

Following their collaborative clean-ups, the groups are keen to do more and get wider community support to keep their local areas tidy.

A Spokesperson from Cawdor Estate said: “We would like to thank everyone who took part, from people living in and around Cawdor village, teams from Cawdor Castle, the Cawdor family and all our staff. We accumulated a huge skip of rubbish, including 35 tyres and a television, so we suspect this is something we may have to arrange on an annual basis.”