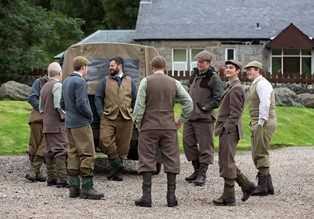 On February 15, 2016, a letter was sent by Dr Aileen McLeod MSP, Minister for Environment, Climate Change & Land Reform, to the Scottish Parliament’s Rural Affairs, Climate Change and Environment Committee regarding the level of wages being paid by sporting estates.

The letter contains incorrect data and was published without any enquiries being made with the sector to ascertain more accurate information.

Three industry organisations – the Scottish Moorland Group, British Association for Shooting and Conservation and the Scottish Gamekeepers Association – have now responded in a joint letter sent to Dr McLeod and copied to members of the Rural Affairs, Climate Change and Environment Committee.

Further to your letter of 15th February to Rob Gibson MSP, which has been publicised in Commonspace in such a way to criticise grouse moors in relation to sporting rates, we would like to correct a number of inaccuracies.

As a general point, there is no single source of data on the pay of keepers, beaters, dog handlers and other people associated with sporting enterprises, which explains the range of published figures you have found. There is a wide range of amounts which employers and employees agree, and that is due to parts of an employment package often comprising a house and vehicle (necessary for the job) and some other payments in kind which can vary considerably.

We are disappointed that the industry was not approached to give up to date information about beaters’ pay which is reviewed annually by employers, particularly after PAYE changes, but we can supply it now. This is based on information for the 2015 season taken directly from gamekeepers and estate managers.

You are correct that deducing an average hourly pay rate from the available data is meaningless, because it encompasses a range from headkeepers to occasional casual workers such as beaters, all on different hourly rates. We note the table of National Minimum Wage rates on page 2 of the Annex to your letter and estates usually relate wages to that. A typical beaters daily rate is now £60, which is the equivalent of £7.50 per hour. That is in fact more than the National Living Wage (from April 2016 for workers over 25), as set out in the Annex to your letter. Furthermore, all beaters tend to be paid the same whatever their age, which does not disadvantage the under 18s in the same way that NMW rates do – after all they are doing the same job and estates are keen to encourage young people to take part and learn.

This is certainly not the poor remuneration alleged. Beaters pay for all ages is typically above the National Minimum Wage for 21 year olds and (£6.70 per hour) and frequently at or above the range of Living Wages quoted in your letter (£7.20 – 8.25 per hour).

An additional point, which analysis of only the monetary statistics obscures, is that many people go beating for the opportunity of exercise, camaraderie, being out in the hills and in some cases working their dogs. There is a strong recreational element – indeed there is some competition to be a beater on the good moors. This is closely in line with Government initiatives to encourage health and wellbeing, and it is an excellent way for people of all ages to access outdoor exercise and develop an interest in wildlife and the hills. The Gift of Grouse campaign has highlighted this aspect of “accessibility” arising from grouse shooting. As a result beaters are happy to work for this wage level; some beaters even refuse pay, particularly if they have the opportunity to work their dogs. Beating is often seen as a holiday job for students, or a day out for retired people and the long term unemployed. That should be valued by Government and society.

We are copying this letter to the RACCE Committee to ensure the correct figures are known, given that some anti shooting organisations such as the League Against Cruel sports have tried to make this an issue, repeated by Commonspace.

The Scottish Gamekeepers Association has added its own comment, as signatories to this letter. Chairman Alex Hogg said: “In our experience, pay for beaters and casual workers has increased in line with other industries, as taxation and other factors have changed. This is a good opportunity to earn a first real wage and gain employment skills for the future. If there are estates paying ridiculously low wages then they should be brought into line with others. People deserve due recompense for the work they do. Thankfully, we are not getting reports of this.”