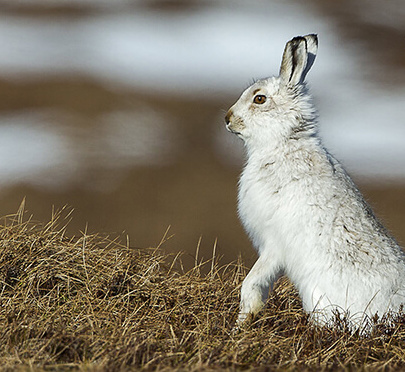 The GoG Blog
by admin
No comment(s)
The Scottish Moorland Group was contacted by the Sunday Herald on March 10, 2016, asking for a response to a story about a cull of mountain hares recently conducted in the Cairngorms.
The article appears in today’s Sunday Herald (March 13, 2016). Our full response to the the journalist is reproduced below.

We are deeply concerned that once again an ill-informed attempt is being made to discredit the legitimate culling of mountain hares, a recognised conservation practice which is essentially no different to deer culling.

Culling of hares is necessary where numbers are high and is recognised by conservation bodies. The conclusion should not be drawn from these pictures that the hares in question have been culled contrary to conservation guidance and most certainly does not contradict the position set out by SNH, Scottish Land & Estates and GWCT.

There is no question of the hare population in the area concerned being jeopardized. The mountain hare population remains high in this area even after culling . The estates in question are also involved in an official GWCT/James Hutton Institute (SNH funded) research project in how to count mountain hares, so are expert in assessing the need for culling. The cull in question also fulfilled another criteria set by SNH/GWCT in that  ‘large-scale culls of mountain hares are only effective when other tick-carrying animals are removed, or there is an absence of them in the area’.  That is the case here – there are almost no red deer at all on the Lecht area.  There’s been population control of white hares in the area for decades with culls responding to peaks and troughs in their numbers. If unmanaged there can be problems with grazing pressure with resulting impact on upland flora.

The estates wish it to be made clear that their long term open moorland management is positively beneficial for mountain hares, ensuring a sustainable population.  Furthermore, you refer to a shooting party – that is inaccurate. The people pictured are gamekeepers carrying out their professional duties.

You refer in your email to the SLE/GWCT guidance but quote it selectively. Here is the accurate position. The Scottish Land & Estates statement within the joint guidance is this: “Culling is legal and is necessary in some circumstances, such as to protect young trees or to support management for red grouse and we support that. We believe such management should be done sustainably and be supported by a sound management plan as part of an overall management approach.  While culling will be an ongoing requirement in certain areas and situations, we support the call for voluntary restraint where large-scale culls could jeopardise the conservation status of mountain hares.”

I would hope that the above explanation would at least give pause for thought. The trend towards portraying any culling of mountain hares as being wrong is ill-informed and misleading.