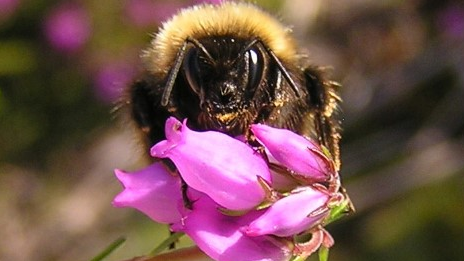 NatureScot’s progress report on its Pollinator Strategy published this week includes details of exciting conservation projects to help boost the number of pollinators in the lowlands and in urban areas of Scotland.

In the uplands, traditional moorland management over thousands of acres already provides a superb environment for flowering plants and crucial native pollinators such as bumblebees, moths and butterflies to thrive.

Grouse moors are estimated to cover almost a tenth of Scotland’s land mass and are home to specialist moorland species absent from other parts of Scotland, so their contribution to our native biodiversity is highly significant. The range of upland habitats includes grassland, heather-rich moorland, peatland and blanket bog, with some native wooded areas in the glens and along riverbanks.

“We know that Bumblebees are critical to maintaining Britain’s biodiversity, with so many wildflowers dependent upon them for pollination. Owing to height and related climate conditions, upland diversity is lower compared to other habitats, but this also means that there are specialist species here that aren’t found elsewhere. It makes it all the more important that we maintain heather habitat and management for their long-term conservation.”

The most familiar moorland plant, heather, produces nectar and pollen for many species of bee including the Heath bumblebee (Bombus jonellus), Redtailed Bumblebee and Bufftailed bumblebee.  The Queen Heath Bumblebee nests in the heather and rears her workers there.

Heather provides a nectar source for bees late into the summer months and also provides good shelter for bees in wet and windy weather.

A little-known benefit of heather for bees may prove even more important. Researchers from the Royal Botanic Gardens, Kew, and Royal Holloway, University of London, have identified a natural chemical in common heather which protects bumblebees from one of their major parasites. Nectar from heather (Calluna vulgaris) contains a chemical known as callunene which helps bees to ward off the harmful effects of the parasite. Protecting our heather moorlands may therefore be one easy way to help conserve bumblebees despite the twin threats of habitat loss and climate change.

Bird’s foot trefoil is another moorland favourite of bumblebees as it is a hardy plant, flowering from May to August, providing an excellent food source for pollinators.

The Bilberry bumblebee (Bombus monticola) is a much-loved bumblebee with particularly attractive markings, which forages on flowering bilberry, found mainly in upland areas in the Highlands. Bilberry is widespread in the uplands and does particularly well in open, sunny spots following muirburn.

Moorland managers promote insect-rich habitats by providing small ponds for wading birds and rewetting the peatland. The wetter the habitat the more insects there will be, a bonus for Red Grouse which eat only insects in the first few weeks after hatching.

Heather which has grown old and woody has reduced flowering ability and therefore is less appealing to pollinators. Muirburn has been recommended by the Bumblebee Conservation Trust as a means to promote flowering plants, ensuring the moors are kept in good condition as pesticide-free, bee-friendly places all summer long.

Moorland managers also control the spread of bracken – a  rapidly growing plant which would suppress the number of flowering plants if left untreated. Bracken is generally devoid of wildlife and may also be poisonous to cattle and sheep.

Specific projects such as the meandering of the Rottal Burn on the Rottal Estate and tree planting along its banks also helps to increase insect numbers by slowing the flow of water and providing shade which keeps the water temperature down. In turn the increase in insects will provide food for birds and fish.

Bees and other pollinators are in decline due to habitat loss, climate change, pesticides, disease, and invasive species. Scotland’s grouse moors make a significant contribution to help reverse this trend by providing an outstanding habitat for pollinators in our wild upland spaces.  This needs to be widely recognised as another benefit of moorland management which should be actively encouraged.