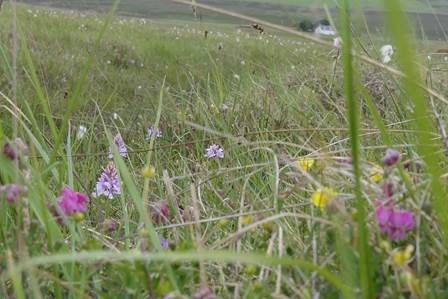 As efforts to combat climate change intensify through the COP26 summit, politicians and conservation bodies have been urged to embrace the contribution of sustainable moorland management.

An estimated 1,600 million tonnes of carbon is stored in peatland in Scotland. Land managers in the uplands have worked in partnership with conservation bodies to restore 25,000 hectares of degraded peatland since 2012, with that work expected to accelerate over the next 10 years.

Wildfires are considered to be the most serious threat to moorland, and climate change means they are becoming more likely. The controlled burning of small patches of heather (muirburn) conducted in the winter removes the dense woody vegetation which would exacerbate the devastation caused by a summer wildfire. While there are short-term emissions from controlled burning, the medium to long-term benefits are greater and help carbon capture according to scientific studies.

Ground-nesting birds such as Curlew, Golden Plover, Oystercatcher, Redshank and Merlin do particularly well on managed moorland, with Curlew and Lapwing being 3.5 times more likely to successfully raise chicks than on other types of land.

Mountain Hares are up to 35 times as abundant on grouse moors compared with other moors.

Scotland’s moorland plants in addition to heather include blaeberry, purple saxifrage, cloudberry  and hare’s-tail cottongrass which are home to a range of crucial insects and pollinators.

This year there have been numerous success stories for birds of prey on and around managed moorland.

The East Cairngorms Moorland Partnership is a collaboration between five estates and the Cairngorms National Park Authority.

The resilient population of Golden Eagles on sporting estates in Highland Scotland has enabled birds to be translocated to both the Scottish Borders and Dumfries & Galloway. It is hoped that these birds will form a viable population in those areas for future generations to enjoy. The Golden Eagle is now green-listed as ‘of least conservation concern’.

Separately, a group of twelve moorland estates recorded more than 360 raptor sightings over the summer. Not surprisingly the majority were Buzzard, which are present on most moorlands in very healthy numbers, but there were also significant numbers of Kestrel, Red Kite, Merlin and Golden Eagle.

“In addition, there are real conservation benefits, particularly for ground nesting birds, birds of prey, rare moorland plants and pollinators and as we all pull together to tackle climate change we need to continue to build on these successes.”