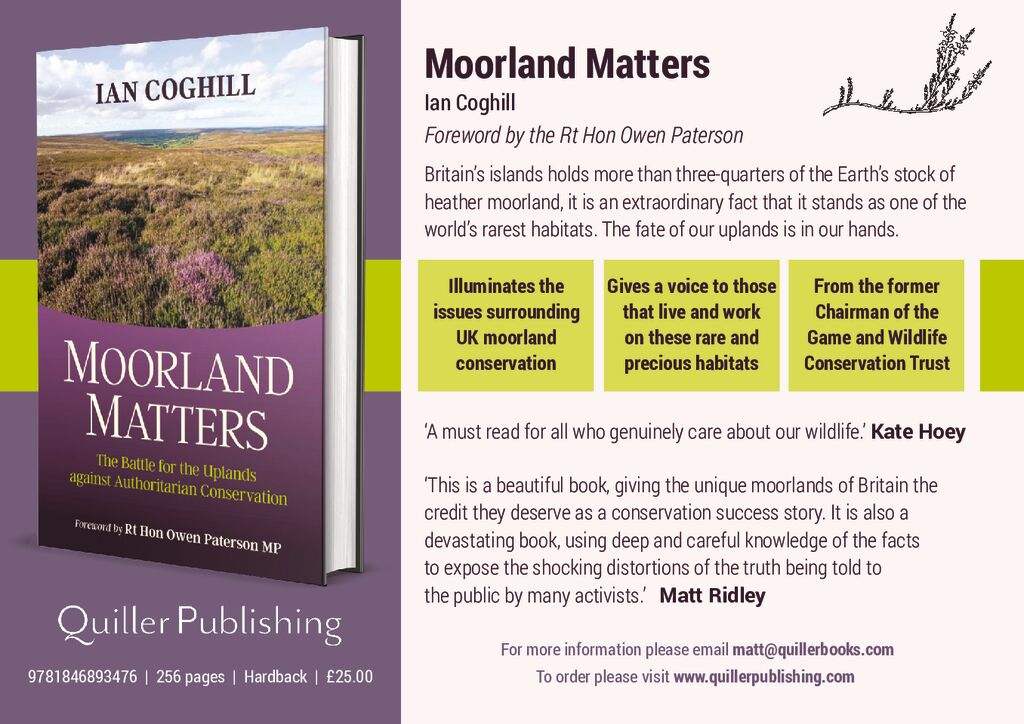 By Ian Coghill, former GWCT chairman. His new book, ‘Moorland Matters’: The Battle for the Uplands against Authoritarian Conservation’ has now been published by Quiller.

There is a battle for Britain’s grouse moors. The conservation industry is intent on acquiring control over their management  because, they claim, they are in a parlous state.

The RSPB, says that they are “industrial landscapes”, devoid of wildlife, that they cause global warming and flooding, that control of predators is so excessive as to render them effectively extinct, and that their peat is being remorselessly drained and burnt out of existence. This mayhem will only be corrected if driven grouse shooting stops, and they are given the control and resources to put it right.

This position is frankly bizarre. So special and beautiful are these moors, that they are replete with designations. They have been declared SSSIs, SPAs. SACs, AONBs, and almost all are National Parks. They have these designations because they have been managed as grouse moors, not despite  being grouse moors. They are some of our most loved and visited landscapes and are internationally recognised as places of great beauty and for their unique biological communities.  They are amongst the last strongholds of rare and valued species, curlew, lapwing, ring ouzel, black grouse, merlins, mountain hares, adders, and many more, would all be in greater peril without them.

The people who own, manage and work on these moors are at their wits end. They were told, when their land was designated how magnificent it was, and that they should carry on doing what got it into its wonderful state. They now find the world turned upside down. They are attacked for doing things they don’t do, and for not doing things they do. The rare wildlife they conserve, apparently isn’t there, or, if it is, it doesn’t count. When they burn heather to avoid the risk of wildfire that would burn the precious peat, the world is told that they are intentionally burning peat.  As a consequence, the darker side of the conservation industry feels emboldened to start covert surveillance of estate employees and their families and indulging in a bit of criminal damage.

This might be understandable if the people responsible could point to places where the disappearance of grouse moor management has led to wholesale improvements in biodiversity and species assemblages. But they can’t. The opposite is the case. When grouse moor management goes, so does almost everything else. Even places run by the greatest critics, often at huge public expense, are a shadow of what they replace.

What is going on is disgraceful. It demonstrates that some in the conservation industry see no need to let a complex reality get in their way. The RSPB’s “Ban the Burn” is a perfect example. Rotational burning is seen internationally as an essential tool in wildfire resilience. It has been used to manage moorlands for centuries and it has kept them and their stored carbon safe. The science increasingly supports the view that burning has a role, even on deep peat. The practitioners say that if you leave the vegetation to grow as RSPB demands, you increase the risk of wildfire and the loss of peat accumulated over thousands of years.

Worse, the moorland communities predictions are coming true. The list of wildfires on moors where the policy of no burning is enforced is long and getting longer. Winterhill, Darwen, Stalybridge, Crowden, Marsden (repeatedly), Dovestones, Moray, Forsinard and on and on. Professional fire fighters have told them, the locals have told them, people with practical knowledge have told them, but they just plough on.

These are not small issues. Keepers are attacked for burning small patches of vegetation leaving the moss and underlying peat intact. Forsinard, where RSPB have a reserve, burnt for nearly a week, releasing 700,000 tonnes of CO2. Saddleworth, released half a million tonnes. It will take at least 200 years to replace the burnt peat.

This is just one example, of how bad things are. Can no one see that the authoritarian approach to conservation dictated by huge, rich, remote organisations, supported by a risk averse regulator, hasn’t worked.  When they come demanding more money, “Or the curlew gets it”, doesn’t anyone ask, “What did you do with the last 5 million?”

Can no one see that it would be better to do things with, rather than to, the people who have maintained these wonderful places for generations? Is it not possible to treat them with respect? The idea, that if you give the conservation industry enough money, and the regulator enough power, you can ignore the people who own and work the land is a terrible mistake.