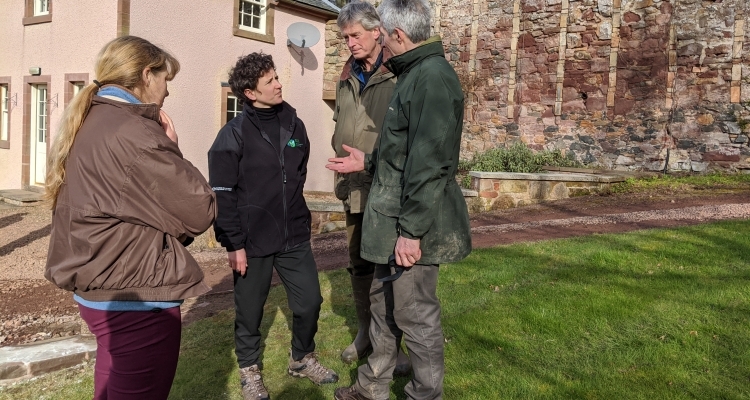 An East Lothian estate holding a prestigious wildlife and conservation accreditation has welcomed Scotland’s Minister for Rural Affairs and the Natural Environment to the estate to learn more about their vital work.

Mairi Gougeon MSP visited the Hopes Estate in East Lothian on Wednesday 4th March where she was given a tour of the estate by owner Robbie Douglas Miller, along with representatives from Scottish Land & Estates (SLE).

The Hopes Estate owner Robbie Douglas Miller said: “At a time when the management of land in Scotland is under the microscope, we are delighted to welcome the minister to The Hopes to provide the Scottish Government with a detailed understanding of all that we do.

“Over the past five years we have been heavily involved in significant peatland restoration and woodland creation, helping Scotland tackle the climate crisis head-on. We have a responsibility as landowners to manage this land in a way that delivers lasting economic, social and environmental wellbeing in our community, and the Scottish Government has a vital role in creating a legislative framework that enables landowners to deliver this without any unnecessary burdens.”

Covering 4,200 hectares of primarily open hill and moorland, the Hopes Estate near Gifford has held Wildlife Estates Scotland (WES) accreditation for over six years. WES, which is supported by the Scottish Government and Scottish Natural Heritage and managed by SLE, aims to promote the best habitat and wildlife management practices, build recognition and raise standards through the introduction of an objective accreditation system.

Among the variety of land management techniques discussed during the tour was the use of Muirburn. Muirburn is the traditional way to manage moorland and has been practised for centuries, resulting in the Scotland’s renowned purple heather landscape. Muirburn is strictly regulated, and the benefits of muirburn are recognised by the government, its agencies as well as those who manage land.

The Scottish Fire & Rescue Service (SFRS) said last year that it was to trial the greater use of controlled burning next spring after gathering evidence on the practice internationally. The controlled burning practice advocated by SFRS is the same as the rotational strip burning employed by gamekeepers undertaking muirburn in the traditional manner on sporting estates, such as The Hopes Estate.