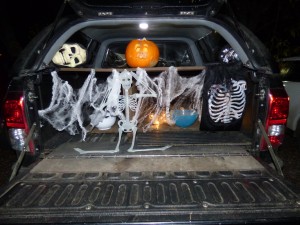 Don’t kids love Halloween! But for working families of grouse keepers in the glens, making sure they aren’t missing out on all the fun (yet again) is a bit of an ask.

Going round the doors to their pals’ houses for trick or treating or ‘guising’ isn’t easy if you live a few miles up a track, the only house in a remote glen, and the next pal is an hour away.

Doing that on a ‘school night’ as well is pretty much a no, given the time we’d all get home – never mind the cost of the diesel – and work and school next day.

Some of the mums in the Speyside Moorland Group had a chat about how we could give the kids a Halloween this year, like those enjoyed by the town children.

Some of the kids live near Drumochter Pass on the A9 but there are a few stretching as far back inland as Huntly.There are others scattered about the glens in between. It’s not just a case of ringing the doorbell and popping in for a coffee!

An option would have been to take the kids into the nearest town but they wouldn’t know the doors they were knocking (and, more importantly, wouldn’t be confident telling their brilliant jokes) so they didn’t fancy that.

One of the beat keeper’s wives, who has two kids, mentioned an idea she remembered from a village she lived in before –  car boot guising.

If you can’t take the kids to the doors, take the doors to the kids. Or, in this case, the car boots.

Instead of decorating the house with lights and pumpkins and dressing up, we would all drive to one place, open the car boots, drape the lights around the boot and decorate the inside of the cars. That way all the community kids would get together and experience the ‘real thing’ of door to door trick or treating, with the twist of it being ‘car-to car’.

We decided on pitching up at Dalwhinnie village and were really appreciative when Dalwhinnie Community Council agreed to give us the use of the car park and the hall, for an after-guising party, totally free of charge.

There are only two kids now living in Dalwhinnie and they were invited. We also put the invitation on the Laggan Community page. Dalwhinnie village primary school was mothballed several years ago. The kids were all children of gamekeepers and, after they grew up, there wasn’t the new generations following on. The Council had to close the school. It’s been closed since, which is a real shame and a lot of the village folk still talk about it.

It shows how important it is for remote communities to have the jobs close by that keeps the families in the villages.

The event on Saturday was brilliant. The only slight hiccup was a wee communication issue over the date which meant that, when the cars turned up, the gate was locked! It was soon sorted, though, and the hall opened and the kids had a brilliant time- as did the mums and dads.

I think we’ll all need a wee rest after the organising but it is was definitely worth it.

We did guising in the dark, with five car boots to visit. We did apple bobbing and donuts on a string.

We were a couple of kids down, due to illness and one mum being in hospital having a baby! A pretty good excuse, I’d say. Our Halloweens might never be the same again….