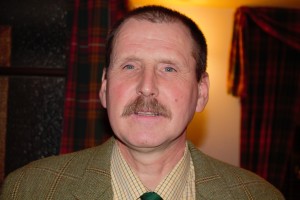 A Grampian gamekeeper who hasn’t been without his signature moustache since he was 18 years old has had it waxed off to raise vital cash for men’s health charities.

For 32 years, Leslie George (50), a gamekeeper in Strathdon, has had a full moustache, with even his wife Sonia never having seen him without his trademark bristles.

However, at the weekend at Colquhonnie Hotel, in front of around 50 well-wishers, Les had his moustache removed by beautician daughter, Natasha, raising over £2500 for the Movember Foundation.

The foundation is a global men’s health charity aiming for a 25 per cent reduction in the number of men dying prematurely from cancer and mental health conditions by 2030.

“Gamekeepers tend not to talk about things like health, really, but I think it is a very importan

t cause,” said Les, who wanted to do something in 2015 but was too busy with management tasks on the estate.

“I first grew my moustache when I was 18 and I’ve had it since. My wife hasn’t even seen me without it. In fact, it is probably only my family who have seen me without one.

“There was discussions about shaving it off. I thought it was maybe a bit tame and, after a bit of arm bending from my daughter, who is a trained beautician, I agreed to have it waxed off.

“The condition was that I would go first. I didn’t want to be next up if I could hear Peter, Joe or Andy screaming. It’s not staying off, though. This is a one-off. I just hope it doesn’t come back in a different colour!”

The lads have had a lot of fun and I know there are others within the gamekeeping community in other parts of Scotland who are getting involved as well.

Because of their work, there is a perception sometimes that gamekeepers tend to not put themselves forward for things. They actually have as much of a sense of fun as anyone else, and are thoughtful about issues like these charities, in their own quiet way.

There was no shortage of folk wanting to get involved. It was a great night!