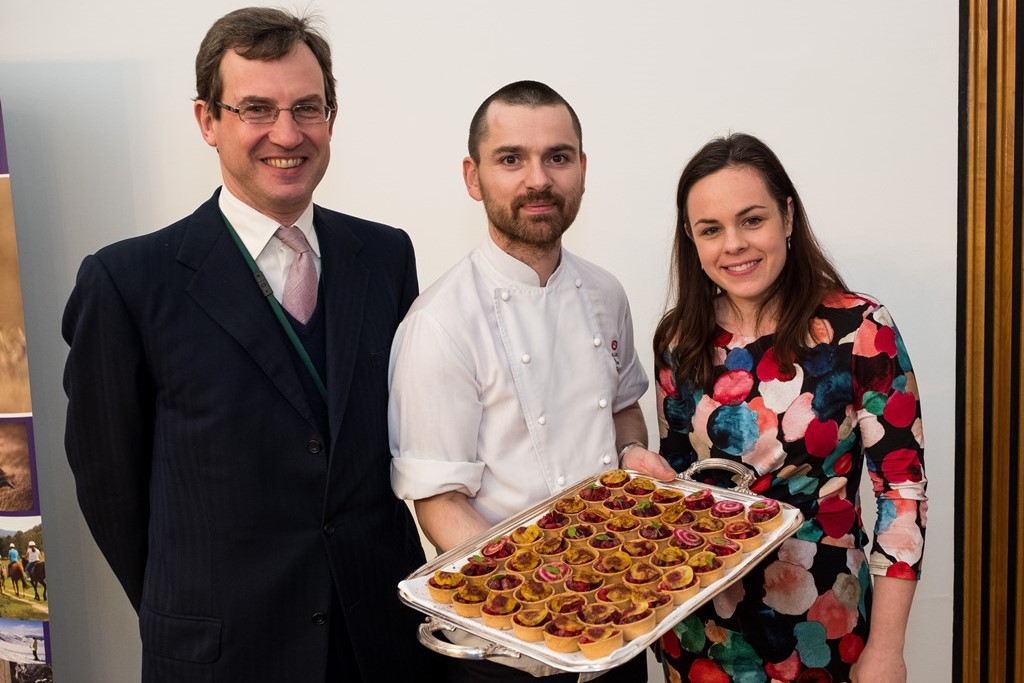 The popularity of grouse as a delicious and healthy food has shown an unprecedented rise as consumers are choosing to eat the finest Scottish foods ‘from hill to plate’.

More grouse has become available through local butchers, farm shops and game dealers selling ‘oven-ready’ grouse direct to the public, as well as shooting parties having the option of taking away plucked and dressed birds. Some game dealers have noted a five-fold increase in demand for grouse and restauranteurs report that any grouse dishes on the menu will sell out.

The Gift of Grouse campaign celebrated grouse at a reception held at the Scottish Parliament today (Thursday 1 February).

Scotland’s top chefs have also been championing the use of grouse in their kitchens throughout the season including Brian Grigor, Mark Greenaway, Martin Wishart, Andrew Fairlie, Tom Kitchin and Nick Nairn. Many local restaurants and hoteliers throughout the country are now also making it a staple on their menus during the season.

Jeremy Dixon of Ochil Foods in Perthshire, the family-run food business, works with over thirty Scottish suppliers. Jeremy was also in attendance to highlight the success of Scotland’s home-grown produce and the importance of supporting rural food businesses.

Jeremy Dixon said: “We supply grouse from estates in Deeside, Angus and East Lothian to restaurants, pubs and hotels throughout the country and we have noticed a five-fold increase in the demand for grouse this year compared to last year, consumers more than ever want to eat the very best produce Scotland has to offer.

“Importunately, we have seen a large-portion of our sales growth come from establishments with lower price points, who hadn’t necessary used grouse before, with chefs and consumers alike being more adventurous and wanting to see more Scottish produce on the menus.”

Brian Grigor, head chef of Number One at The Balmoral Hotel, Edinburgh, is passionate about cooking with grouse, having grown up with both his father and grandfather being gamekeepers. Guests at the event were treated to some grouse canapés created for the event by Brian Grigor.

Speaking at the event, Brian Grigor said: “Grouse is a really delicious and healthy game meat and consumers are now eating far more thoughtfully, by choosing produce in season. It is fantastic to see a growing appreciation for grouse beyond fine dining restaurants as more local food retailers are stocking ‘oven-ready’ grouse available for the general public. I hope that events such as this help to spread the word about grouse as an affordable and tasty meat to a wider audience.”

Andrew Hopetoun, chairman of the Scottish Moorland Group, said: “The owners of Scottish grouse moors invest in and manage these beautiful, heather-covered uplands creating rural employment and environmental benefits, and the surplus stocks of wild grouse give such a wonderful seasonal product that I’m delighted to see getting support.

“Game offers a way of life to many rural communities and is an important part of many artisan food businesses. People today want produce with provenance and quality at heart and Scottish grouse has exactly that.”