Scotland’s leading chefs, including Andrew Fairlie, Carina Contini, Martin Wishart and Mark Greenaway, have joined forces, along with the Gift of Grouse, at the start of the Scottish Game Fair to champion the use of grouse in kitchens.Customers are increasingly demanding locally sourced food and Scotland’s top chefs are calling for more local restaurants and hotels to offer grouse on their menu throughout the season. 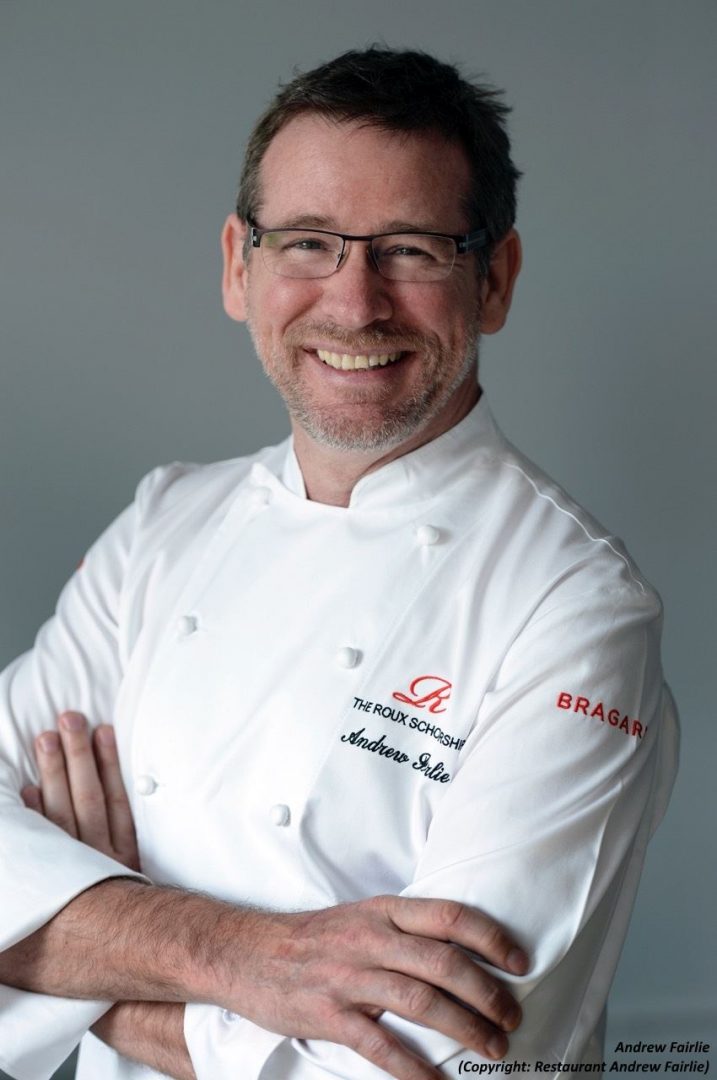 Ahead of the Scottish Game Fair which is held at Scone Palace, Perthshire each year and attracts more than 30,000 visitors, a number of chefs have signed a letter to highlight their passion for grouse and its “hill to plate” credentials, whilst encouraging more people to celebrate the best of Scotland’s larder.

Andrew Fairlie restaurant at Gleneagles is the only restaurant in Scotland to hold two Michelin stars.

Andrew Fairlie said: “We serve grouse every year in season and it’s extremely popular with our customers. We tend to serve it as a classic dish without too much to distract from the flavour of the meat. Accompanying the grouse will be seasonal vegetables and garnishes.

“In the summer our customers come from all over the world and they want to eat the finest local food. Customers like it because it’s sustainable and its provenance is exact. Our game supplier is Ochil Foods and we are fortunate that they are only five miles away from the restaurant; here in Perthshire we are surrounded by grouse shoots so we are very lucky to be able to source game from nearby.”

James Withers, CEO Scotland Food & Drink, said: “We are very lucky in Scotland to have an extraordinary local good food story – top of the list of things visitors want to do when here is to try our local food and drink. Game is an increasingly popular choice for shoppers across the UK with 41%* of people throughout the UK believing Scottish game is better than that from elsewhere and 63%* of Sots believing the same. These fantastic numbers provide us with a huge opportunity to promote and celebrate the locally sourced grouse on offer.”

Demand for grouse has been further boosted this year by its appearance on the BBC’s Masterchef series. Lorna Robertson and Brodie Williams were Scottish contestants on the programme, who both made it through to the final five, serving up grouse as one of their main courses.

Roast grouse has less than a third of the fat and twice the protein of roast chicken, is also high in calcium and iron and is free-range.

Edinburgh chef and restauranteur, Carina Contini commented: “Grouse is quite simply a Scottish treasure. If you love food, the start of the grouse season on the 12th of August is a date to be keenly anticipated. I know from speaking to gamekeepers and farmers that grouse is a great, sustainable choice, and it also tastes fantastic.”

Carina Contini, along with her husband Victor, own three Edinburgh restaurants: Contini George Street, Cannonball Restaurant & Bar and the Scottish Café. She is also the author of Carina Contini’s Kitchen Garden Cookbook and was the first female chef to be asked to join the Slow Food Chefs’ Alliance.

Also championing grouse is Mark Greenaway who confirmed that he will be serving grouse this season and is creating new recipes to delight diners at his restaurant.

Mark Greenaway said: “Chefs up and down the country get excited about the 12th of August or the Glorious Twelfth as it is known, marking the start of the game season. Grouse is a rich meat that owes its flavour to the heather that the birds graze on. It is one of the last remaining truly wild meats that we eat.”

Mark was awarded three AA Rosettes for Culinary Excellence in 2012. Restaurant Mark Greenaway in Edinburgh ranked 13th in the UK by Square Meal in 2016, and has been runner-up for Best Restaurant in the Observer Food Monthly magazine in 2013, 2015 and 2016.

Martin Wishart has also provided a delicious grouse recipe (available on the GoG blog) for this season. Martin likes to feature grouse at all his restaurants throughout the season, including The Honours in Edinburgh, a modern brasserie, Martin Wishart at Loch Lomond and Restaurant Martin Wishart, both of which are Michelin starred.

Martin Wishart said: “Scotland has a rich and varied larder and I am passionate about cooking with Scottish produce whenever possible. I look forward to the start of the grouse season with much anticipation as grouse will again be a firm favorite across our three restaurants come the twelfth of August. I would encourage as many local restaurants and hotels throughout the country to serve grouse as it is a true Scottish delicacy.”

75% of UK consumers said they try to buy British food and drink if it is available, according to a survey conducted by IGD (the Institute of Grocery Distribution) in December 2016.

A DEFRA survey conducted in 2015 found that nearly 80% of British consumers believed that buying local produce was important.