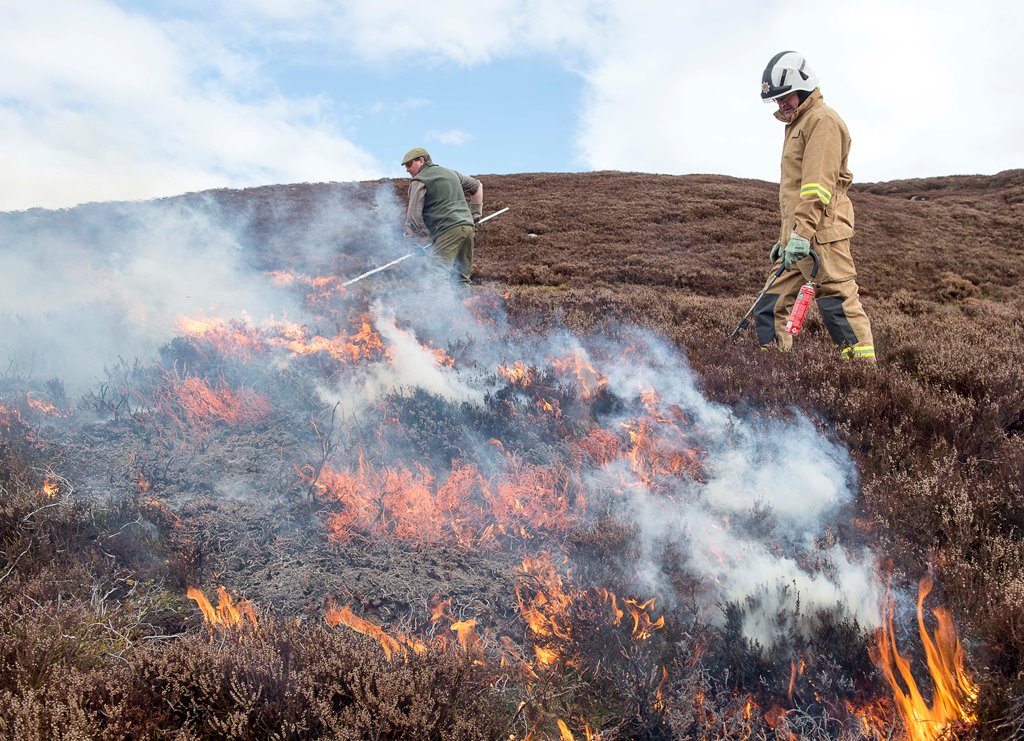 A very high to extreme risk of wildfire is in place across North-East, East and Central Scotland for the next few days and in Western Scotland there is an extreme risk of wildfire from 15th to 17th April. The Scottish Fire & Rescue Service is warning members of the public to act responsibly in rural areas and this applies particularly to moorland, where wildfires can spread rapidly across vast areas.

Moorland managers have been using controlled burning for generations as an effective means to prevent wildfires from spreading.

Muirburn creates natural fire breaks and reduces the mass of dry vegetation which acts as fuel to the fire.

Muirburn is also called ‘cool burning’ as only the upper canopy of vegetation is set alight, with the ground underneath remaining untouched and often still cold and damp after the flames have been extinguished.

Controlled burning takes place in cycles of up to 20 years, with small patches burnt at different times then left to regenerate. This creates the patchwork landscape we see around Scotland, providing food and shelter for game and moorland birds, helping boost the wild populations.

It seems likely that climate change will make wildfires more frequent and more intense. This year the SFRS has tackled nine wildfires on Skye in February alone. We need to ensure the benefits of controlled burning are recognised as we face the challenge of a changing climate.

The main muirburn season is between 1st October and 15th April which avoids the most important breeding period for ground-nesting birds. All burning is carried out in compliance with the Muirburn Code and we believe this level of regulation helps reassure the public that controlled burning is safe and appropriate.

Recent studies have examined the impact of muirburn on biodiversity, peat formation and carbon storage. One research summary published by members of the GWCT concluded that, on the specific site surveyed, burning approximately every 20 years retained the benefits of carbon storage and peat growth, alongside increased biodiversity and reduced fire risk.  Another study by Duke University in North Carolina found that low-severity fires enhance the carbon retention of peatlands.

Indigenous communities around the globe practise their own forms of controlled burning to help prevent the spread of wildfires. Gamekeepers are Scotland’s knowledgeable tribe but we fear our voice is seldom heard.