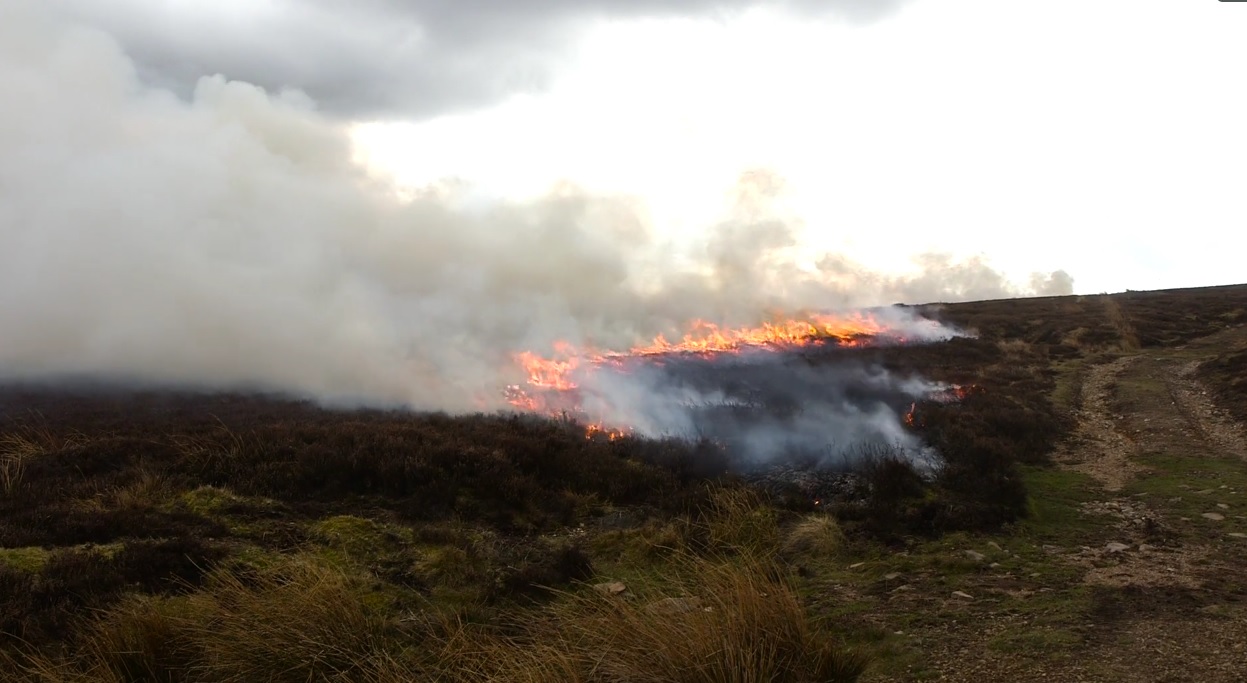 Gamekeepers are calling on Scottish Government to protect the practice of muirburn and acknowledge its role in preventing wildfires and protecting carbon stores.

Millions of tonnes of greenhouse gases have been released into the atmosphere during major recent wildfires in the Flow Country, Galloway and Moray, which burned for days.

Out-of-control wildfires scorched miles of hills, wet bog and woods, with the blazes which spread to RSPB-managed Flow country doubling all of Scotland’s greenhouse gas emissions (700 000 tonnes) over 6 days, according to WWF.

In comparison managed fires, like muirburn, would have released between 10 and 1,000 times less carbon had small areas of firebreaks been prescribed over a 10-year period.

Now gamekeepers are urging Scotland’s government to protect the role controlled muirburn plays in creating fire breaks which can prevent the spread of catastrophic wildfires.

Controlled burning and cutting of accumulating heather and grasses reduces the fuel available to burn, helping to stop out-of-control fires.

Moreover, a pioneering study has also revealed for the first time that quick surface burning over peatlands can also help to protect the carbon stored below the surface.

The paper, published during lockdown in Global Change Biology, showed that low severity fire, like that practiced by gamekeepers, enhances the long-term retention of carbon in peatlands.

The US scientists found that quick surface fires made moist peat more stable, often creating a protective crust which allowed it to retain more of its stored carbon for longer.

The study has significance in the climate emergency because, globally, peatlands lock in a third of global soil carbon.

“Controlled muirburn prevents surface vegetation from building up. Without addressing the build-up of fuel, one match or a smouldering barbecue and you get the raging, damaging wildfires we are seeing more of in Scotland today. Unlike quick, controlled muirburn, these infernos can scorch everything for days and, if on peat, damage our efforts to control climate change because of the amount of carbon released into the air.

“In addition, what this new research shows is that fires with a low intensity, like managed muirburn on peatlands, actually protect the carbon below.

“This is another piece of work which refutes the assumption made by those who dislike land management that controlled muirburn is a net contributor to carbon into the atmosphere. Like any burning, some carbon will be released but, perhaps counter-intuitively, what this research show is that these low intensity fires are actually helping to protect the vast carbon stores locked in the ground below,” said Lianne MacLennan, Co-ordinator of Scotland’s regional moorland groups, who have released a new film on the subject, titled: ‘Muirburn and the Climate Emergency’.

On Scotland’s grouse moors, gamekeepers undertake ‘cool’ muirburn in strips or patches to provide food and habitat for grouse, sheep, and deer.

These quick burns remove surface vegetation but, unlike wildfire, do not ignite the peat below.

Recognising this the Scottish Fire and Rescue Service has itself been exploring ways to reduce fuel load as part of wildfire mitigation.

Last year, it announced that it was due to trial the burning and cutting of vegetation following research from USA, Canada and Australia.

Last year’s fire in Moray burnt out 10 miles of habitat over four days after starting in an area where muirburn had been restricted for ten years and banned for three.

Over 80 firefighters including 50 gamekeepers extinguished the blaze which reignited because it burnt down into the peat, releasing hundreds of thousands of tonnes of carbon.

“Rather than being a bad idea during a climate emergency, controlled fire has an important role.

“Scotland is becoming increasingly fire prone and even wetter areas are not immune when a fire starts moving, as has been witnessed,” said Angus gamekeeper, Conor Kelly, who appears in the new film.

To view the new film, ‘Muirburn and the Climate Emergency’, go to: https://www.youtube.com/watch?v=zDib7onts3c