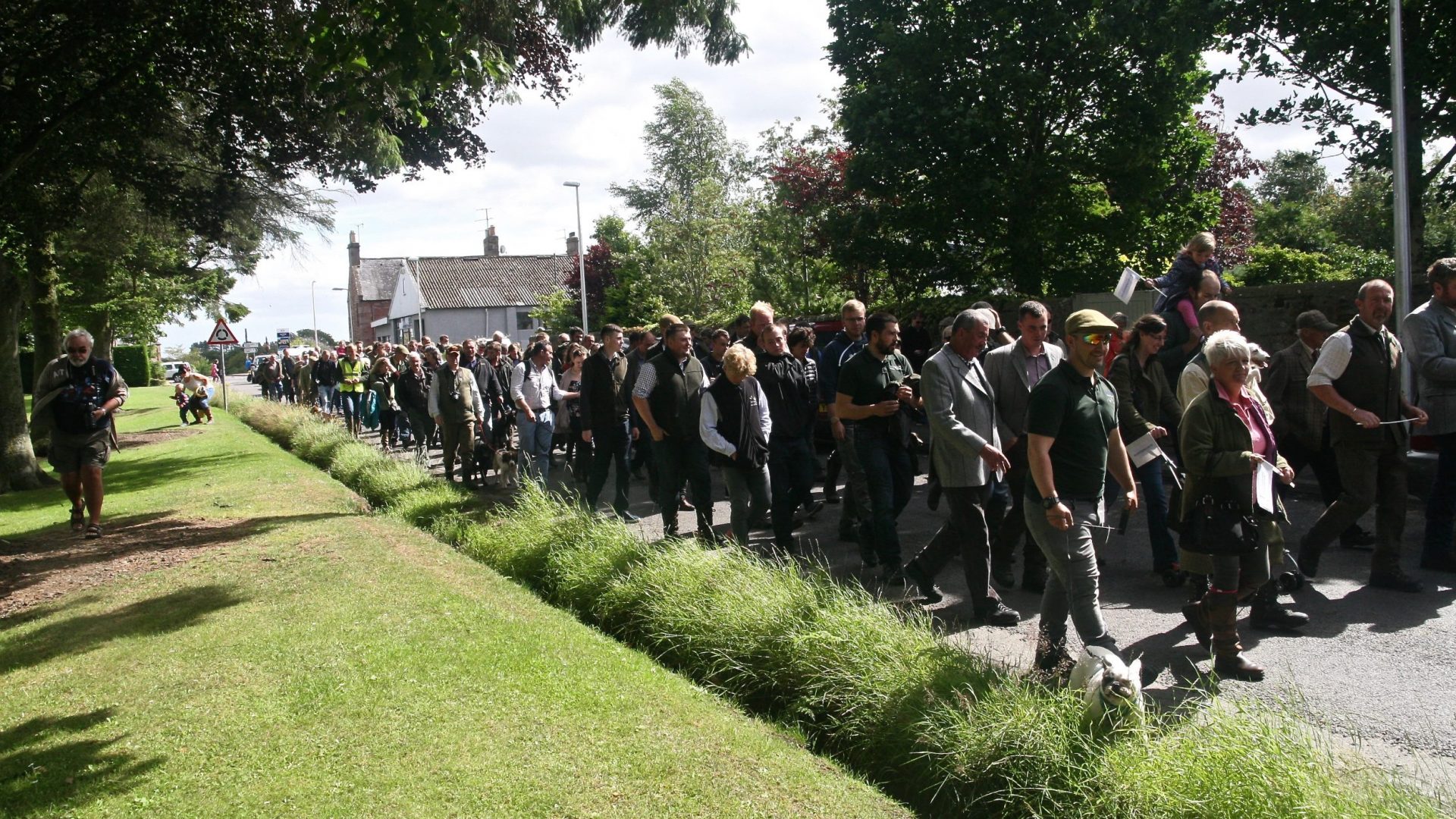 By Lianne MacLennan, Co-ordinator for the Angus Glens Moorland Group

On Sunday the 7th of August 2016 the small and quaint village of Edzell, in Angus, saw over 350 people gather at its iconic Dalhousie Arch.  There was a mixture of Gamekeepers and their families from across the country who are members of the seven different Regional Moorland Groups that stretch across Scotland. They were joined by their local MSPs and Councillors, businesses and suppliers of their sporting estates along with beaters and dog handlers and general members of the public who support the field sports industry.

The day was a great success, starting with an historic march down Edzell High Street from the Arch to the Muir. The procession was led by local Howe O’ the Mearns Pipe Band. People were welcomed at the Muir with a free BBQ of delicious beef and venison burgers which were cooked off by local butchers Bruce Brymer Ltd. The Regional Moorland Group tent was set up offering complimentary refreshments, suppliers trade stalls and local chef Eden Sinclair from Sinclair’s Larder in Edzell prepared a selection of in-season Game for people to sample and taste. Working hill pony Fergus made a trip down the Glen to welcome the children in his stalking best and gamekeepers wife/local artist Mel Shand was on hand to paint the wee ones’ faces. Angus Falconry were also present with their collection of birds of prey, allowing people to learn about these special birds and be photographed with them.

Although the event was attended mainly by people who support our industry it was also opened to the general public, who were more than welcome to join us on the day to learn more about our Regional Moorland Groups and their sporting estates. The event included an educational tour of one of these estates, with 6 vehicles full of members of the public interested in learning more about our grouse moors. On these tours they got to see estate life first hand, learnt a bit about our rural communities and the investment the estates make in the area and a got glimpse of the array of wildlife that lives on our managed moors. Once the tours returned, happy faced individuals reported sights of 15 rare Red Kites, a couple of herds of Red Deer, some broods of grouse and some Wild Mountain Hare to name but a few. They were taken aback with the breathtaking scenery and could not get over the colour of the Heather that was carpeting our moors in its vibrant full bloom.

The gathering was a symbol of unity, to stand together and show the number of people that the grouse industry touches and who rely upon it. As regional group coordinator to both Angus and Grampian Moorland Groups, I was there to represent three different aspects, not only the groups- which I have now made an unexpected career from- but to support my husband’s career as a Gamekeeper. I was also there as his wife and the mother to our three year old son and as a member of a rural community in which our livelihood thrives.

Living in such a rural environment, it was great to see these small communities from across the country rally together and show such support to the industry. Suddenly I didn’t feel so remote. I recognised that, being a young mum, I was not alone; there were many other families of different ages in the same boat as us. I could see the number and variety of different businesses that depended on our sporting estates. One lady told me how two thirds of her small businesses income depended on these estates spending money locally. Looking around the sea of people you could make out all ages from one end of the spectrum to the other. A baby born into a keepering family to a retired gentleman/lady that enjoys a day on the hill to keep their fitness level up and enjoy a passion close to their hearts. As we descended down the High Street, watching the residents of Edzell come out of their homes to watch the procession from down the street and support us, also felt quite special. Walking on the front line of the March with my family, friends and colleagues, I felt proud to have organised and to have been part of such a monumental day.