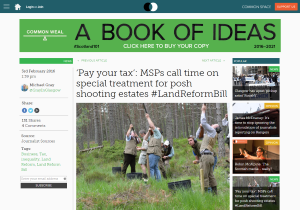 Tim Baynes, Director of the Gift of Grouse initiative, has responded to a highly inaccurate online blog post that claims it is time to end the ‘special treatment’ for sporting estates.

Published on a website called CommonSpace, the article entitled ‘Pay your tax’ also makes erroneous claims about the wages received by gamekeepers on estates across Scotland.

Tim said: “Sporting estates no more “avoid” paying non-domestic rates than farming or forestry does – all have a longstanding exemption designed to support the rural economy. Moreover, the exemption for sporting rates was brought in because they were proving too expensive to administer. The Scottish Government is trying to impose the same system again, which did not work before. This will bring any land on which there are sporting rights onto the rating roll, from the biggest estate to the smallest croft.

“It is not a tax on “aristocratic families” as some might think but a charge on almost all rural land holdings. If it operated in such a way to single out only larger landholdings that would clearly be unfair and potentially open to legal challenge.

“The report by League Against Cruel Sports alleges that there is a £300,000 subsidy to the sporting sector. That is simply incorrect. Sporting enterprises cannot and do not receive any public subsidy – only farming businesses are eligible.

“It also tries to imply that workers on shooting estates receive pay below the minimum wage. The data that allegation is based on covers both full time employees (gamekeepers etc.) and the many part-time employees, some of whom only work a few days per year beating in the season. So an average figure is meaningless. Keepers are relatively well paid and usually receive a package which includes a house and vehicle, so again a monetary comparison of that type is meaningless. It is not clear why the Minister has been asked to provide more written information on this non-issue, as if she was not already busy enough.”

The full article, including Tim’s response in the comments section, can be read here.